As I have set forth in my autobiographical novel called The Long Road from Highland Springs, when I began teaching at a small, Mennonite Bible college in Ohio in 1994, I never expected to make the classroom my career. My

affection for teaching was hardly love-at-first-sight. My first efforts were uneven, at best, and my students could easily detect my discomfort and lack of confidence. To this day, when I cross paths with former students from that first year, I have to work hard to stifle an instinctive urge to blurt out, “I’m so sorry. Can you find it in your heart to forgive me?”

Eventually things got better, much better indeed. Reasonably good performance reviews turned in by my students each year served to bolster my confidence, and I became far more comfortable in the role of a teacher. Since I had not set my sights on an academic career from the get-go, however, I did not follow the common path of preparation for aspiring professors.

I was thirty-five by the time I finished seminary, and I never completed a doctorate. Since my entire career as an academic professional played out on the campus of one tiny, two-year Bible college, the absence of an advanced degree was never a real impediment. Still, I often sensed that my effectiveness as a teacher, even in the limited setting of my instructional career, could have been enhanced if I had taken a terminal degree.

In 2008, my career as an academic professional came to an end. The school where I taught was owned and operated by a small denomination in the free church tradition, and I was being drawn toward the liturgical tradition as the context for public worship and church identification. Non-involvement in a church belonging to the Anabaptist family of denominations (despite my continued embrace of Anabaptist discipleship distinctives) was grounds for dismissal, and so I was dismissed.

That was nearly seven years ago. I was fifty-eight years old. I am still effectively unemployed even though during the intervening years I completed preparation for Holy Orders in the Anglican communion, was ordained an Anglican priest, and wrote a book. About a month ago, a former colleague and I began giving leadership to what we are calling A Gathering for Worship in the Liturgical Tradition, which meets in Plain City, OH, on alternate Saturday evenings. We have no idea where that endeavor will lead, but initial response has been encouraging. (For more information on “the gathering,” click here or on the tab under the picture at the top of this page.)

Some may wonder why, if I had grown to love teaching so much, I did not look for another teaching job, even if it meant I would need to relocate. Again, I have told that story in The Long Road… . It is, as they say, complicated. My wife was diagnosed with breast cancer just two weeks after my teaching job ended. My daughter, a single mother with a young son, had recently moved to our area from another state. My wife needed me to walk with her during her battle against cancer, and my grandson needed me to provide a stabilizing influence and a male presence in his life. Coupled with my advancing age, those factors posed an insurmountable obstacle to relocation for the purpose of continuing my teaching career.

The whole thing made me angry. The passing of time has taken the away most of the sting, and the normal process of living has worn down many of the jagged edges. Once in a while, however, a wave of emotion breaks over me with such intensity I feel as though I cannot breathe. In those moments, I know that I need to focus my attention elsewhere in order to clear my head and not surrender to the negative impulses welling up within me.

I experienced one of those moments this afternoon and with it a flash of insight. For the first time, I may have uncovered the reason it has been so difficult to escape the periodic clutches of anger and sadness and frustration which have plagued me. If so, it was hiding in plain sight, so obvious that I can’t believe I never saw it clearly before now.

I am angry—albeit much more rarely now than earlier—because I have lost that source of stimulation, challenge, and fulfillment which I had come to take for granted over my fourteen years as a college instructor. I have lost the daily experience of interaction and relationship with students, and my life has been permanently impoverished as a result.

I estimate that, in fourteen years of teaching (during which time I taught a total of fifteen different courses), total enrollment in my classes reached 1,600. Since many of those 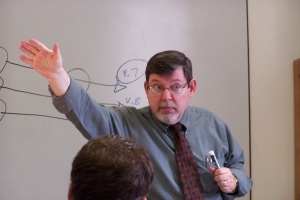 students took more than one of my courses, I suspect that my class rosters contain the names of at least 800 different students.

I can’t remember them all, of course, but it is surprising (to me at least) how many names and faces I can recall, even from the early years. And a review of yearbooks overwhelms me with memories, almost all of them good. Then it occurs to me that I will never again be introduced to sixty new students a year, many of whom would have lodged themselves permanently in my recollection and some of whom would no doubt have become my friends.

This is the watercolor done for me by a former student.

I came to the awareness I am relating in this blog post while I was looking at an original watercolor painted especially for me by one of my former students. I am humbled and gratified by such a personal, thoughtful, and beautiful gift. And I have to admit that, when it occurred to me that I no longer have the annual opportunity to meet and develop a relationship with quality young people—who taught me at least much as I taught them—it made me mad.

That moment passed, of course, and was superseded by an awareness of the great privilege I had to be involved in the education and spiritual formation of hundreds of young people who are making significant and substantial contributions in a wide variety of careers and vocations. Many have married and are raising families of their own. Some are teachers, some are farmers, some are homemakers and full-time moms. Some are medical professionals, some are lawyers, some are artists—writers, musicians, actors, painters. Some serve the church as pastors and missionaries. At least one has taken Holy Orders in the Anglican communion.

With the passing of time, even with the benefit of Facebook and other social media, the ties with my former students will inevitably diminish. I deeply regret that, especially since there is no longer a source of new names and faces to take their place. That reality, although mainly a subconscious influence on my psyche, has contributed to the low-grade anger I continue to experience from time to time. I have lost an invaluable dimension to my life, and I miss it… terribly.

Still, life goes on. I am so very grateful to have had the privilege to spend fourteen years in the college classroom. That experience left me with bounteous good memories and multitudes of friends. My students challenged me, encouraged me, and required me to work hard and do my best. They made me a better teacher, a better thinker, a better person.

Sooner or later, I will be able to contemplate the reality of no new students in my future without feeling anger. Given the great benefit I have derived from my association with former students, however, I am fairly certain that every time I remember that my days of getting to know new students each year are over, I will feel at least a little sad.