I had never heard of the term “epic fail” when I went through one in 1986.

At age 36, I was in my second year as pastor of a large Mennonite Church in Harrisonburg, VA. I had joined the church’s staff as an associate pastor in 1982 and was

called, by unanimous vote of the congregation, to succeed my popular predecessor, who had served in that role for nearly twenty years, when he moved on to a church in Pennsylvania in 1984. Two years into my term, things were not going well. I was exhausted—physically, emotionally, and spiritually—and discouraged. In early January, I resigned, fairly sure that I lacked the gifts necessary for effective pastoral ministry and maybe for vocational ministry of any sort. END_OF_DOCUMENT_TOKEN_TO_BE_REPLACED

On two or three occasions in my life, I’ve had a strong inclination to pursue a particular course of action, but, at the time, I could not honestly say whether I was being led by God or driven by my personal desires and inner impulses. On those occasions, I followed a consistent pattern.

I told God (in a reverent and respectful way, of course) that I intended to forge ahead with my plans, since I felt so strongly about doing that, and if the course I had chosen was inconsistent with his sovereign plan, he could close the door or block the road. I wasn’t being obstinate or impertinent. I felt the time for movement had come, I was not clear about the will of God in the matter, and if, when it became clear, I needed to change course, I would readily admit my error and make the necessary change. I believe, over the years, God has honored that honest approach to knowing and doing his will. END_OF_DOCUMENT_TOKEN_TO_BE_REPLACED

The subject of this post is a new idea for me. I usually don’t write about something until I have thought about it for much longer than I have thought about this. I mention this in order to say that I reserve the right to retract everything I say here after I have had time to consider it more carefully. In the meantime, I want to test the idea while it is still fresh in my mind.

Even though I don’t attend church services very often these days, I still consider myself a churchman. I recognize the importance of the community of believers for the cultivation and development of faithful Christian discipleship, and I look forward to the day when I will once again be part of a local body of believers, experiencing and benefiting from corporate worship, accountability, and mutual care. (I have written elsewhere about why this is not happening right now, but if you’d like to know more, look me up, buy me a cup of coffee or some other beverage, and I’ll be happy to be more specific in a face-to-face chat.) END_OF_DOCUMENT_TOKEN_TO_BE_REPLACED

I am using this post to bring you up to date on where things stand regarding the vision for a new church in or near Columbus, Ohio. When you finish reading, you may conclude that there is still a lot more to this vision that is tentative rather than definite. That’s true. These

“next steps” are not yet anchored in concrete. In fact, what I am sharing here is more like the wooden forms into which the concrete has yet to be poured. But it is a start.

By the way, I am pleased to be able to write much of what I report here in the first person plural, as “we” rather than “I,” since I am serving as the voice for at least two other brothers who share this vision with me. This is a small “core” group, I know, but it is three times as large as it was just a few months ago. And one reason for reporting developments this early, where so much remains tentative, is to encourage others to identify with the vision in its formative stage. I want to provide sufficient information to show that the vision is developing in a thoughtful manner, with no desire on anybody’s part to impose a personal agenda on the process. We are, as much as we know how, waiting on God to direct our path every step of the way.

END_OF_DOCUMENT_TOKEN_TO_BE_REPLACED

Before I die, I hope to be part of a church which identifies itself, deliberately and forthrightly, as an agent of the Kingdom of God. More particularly, I hope that church will embrace the three-fold relationship of the church to the Kingdom which Lesslie Newbigin described when he wrote,

“The church is only true to its calling when it is a sign, an instrument, and a foretaste of the Kingdom of God.”

END_OF_DOCUMENT_TOKEN_TO_BE_REPLACED

On March 22, I posted the following status update on my Facebook wall:

I have progress to report on the possibility of a new church in W or NW Columbus. You will be able to read it in my blog next week, but it is encouraging. I’ve always said that it might be that God was not saying “No” to that vision, but rather “Not yet.” I still believe that is what He is saying. The vision has not died!

I have begun posting announcements of future commitments as a way of holding myself accountable—lest I rationalize my way out of following through on them—and of forestalling my natural tendency to procrastinate. The problem with this pattern, I am finding, is that I post the announcement in a moment of enthusiasm and jubilant potentiality. Later, when the ardor has cooled and the chill of reality has settled in, it is difficult to recapture that original enthusiasm, or even to recall why I felt so optimistic in the first place.

I feel that way, at least somewhat, with regard to the announcement above. I posted it last Friday afternoon, just hours after a conversation which had left me fairly bursting with excitement. Nearly a week later, that enthusiasm has done daily battle with my innate cynicism, and if I had not made the public commitment, I could easily convince myself that any “progress” on this front is so incremental that to discuss it here, and especially to extrapolate future possibilities from it, would be premature in the extreme.

END_OF_DOCUMENT_TOKEN_TO_BE_REPLACED

Podcast No. 13 is now available. It is called “God Save Us From The Successful Church,” and it is around 7 minutes long. To download it as an mp3 file, click here. To listen to the podcast now, click on the button below. This podcast is also archived on the “Podcasts” page of this blog. Thanks for listening.

This may surprise or even annoy some of my readers, especially those who are also bloggers, but I don’t read many blogs. I probably shouldn’t admit that, but I want to be absolutely forthright in what I communicate here.

There are two reasons why I don’t read blogs. First, I don’t have time. I know, I know. The

more I write in this post, the more trouble I’m in, since I admit I don’t have time to read blogs, and yet I write one which I hope other people will read. Truth be told, I am amazed that anybody finds the time to read my blog. And believe me, I don’t take my readers for granted.

Second, most blogs are not very good. Good writing, like any proficiency, is a blend of innate ability and hard work. A combination of talent and sweat. A melding of gift and discipline. Let’s face it, few bloggers achieve that level of proficiency. If we did, our work would probably be picked up by a reputable publisher instead of being relegated to the internet.

END_OF_DOCUMENT_TOKEN_TO_BE_REPLACED

It has now been exactly one year since I set up shop in a small office on 1st Avenue in Grandview Heights, an urban community just west of downtown Columbus, OH. The locals call it simply Grandview, and it is a legal jurisdiction separate from Columbus. It has its own mayor but not its own identity so far as the Post Office is concerned—our mailing 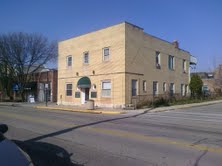 address is Columbus, not Grandview; go figure. We chose the community as a potential location for a new church since it is not far from the south-most reaches of the main campus of The Ohio State University. (It also didn’t hurt that my favorite coffee house in all of Columbus is an easy walk down the street from my office.)

The office is simple, even spartan—just one room and a tiny bathroom—on the first floor of a two-story building. (In the picture shown, our office is in the southeast corner, just to the right of the entrance.) Our only neighbor downstairs is the office of the lawyer who owns the building. Upstairs are four small residential apartments. Nothing fancy, but altogether suitable as a place to work, to meet, to think, to change my shoes before walking through the neighborhood. It is a minuscule presence in the community, but it is a presence nonetheless.

The other day my landlord asked me how things were progressing toward our goal of establishing a church in the neighborhood. I told him things were going slow, but I was still there (in the office) and still hopeful. In an entire year, he had never said a word about the potential for St. Patrick’s Church becoming a reality. On this particular day, nearly a year after I moved in, he said, “I wish you well in your efforts, and I hope it really does happen.”

END_OF_DOCUMENT_TOKEN_TO_BE_REPLACED

I’ve not had the best of luck with Facebook status updates lately (as I noted in my blog post of November 9). Still, I ran across a series of updates which I published last May (Yes, I keep a file. Do you think I take Facebook a bit too seriously?), and I felt they were worth repeating. In fact, upon reflection, I decided to use them as the basis for a blog post. They will help me say something I have wanted to say for a while.

When I wrote the status update which I published on May 3, I had no idea it would be the first installment in a short series. I don’t recall what prompted it. I only know that, over the course of a week, I published five status updates, all of which conformed to the same pattern.

That is, in each of them, I reflected on the ways my life had been affected by the qualities and characteristics of the major Christian traditions with which I had identified over the years. Instead of saying more about that series of posts, I’ll simply share them with you again, as they appeared on my Facebook wall from May 3 to May 10, 2012.

END_OF_DOCUMENT_TOKEN_TO_BE_REPLACED

Join 149 other subscribers
Follow The Relentless Pursuit on WordPress.com